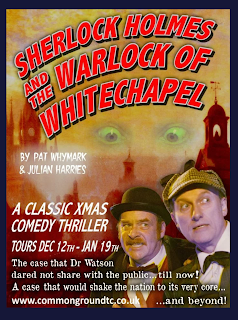 ​     "Who'd be interested in this old relic, Holmes?" murmured Watson, one morning at the breakfast table of 221b Baker Street. "Nonsense, Watson. A splash of cologne and a trim of your moustache, & I’m sure someone would have you". "Be serious, Holmes. Look here - in the Morning Post!"
Thus began the case that Dr Watson dared not share with the public, till now. A case that, were its full facts to be known, would shake the nation to its very core, and beyond.
Ancient artifacts are disappearing from museums and private collections all over Europe,. A pre-Christian effigy one day, a shamanic totem the next, a pagan fetish at the weekend. Either someone's on their own personal antiques road trip, or they're trying to summon dark forces. and gain mystical powers. But to what end…and why?
The ensuing adventure takes Holmes and Watson from the wharfs and alleys of East London, to the icy wastes of the north and the hidden temples of the east (changing at Peterborough), as they pursue "The Warlock of Whitechapel"

Julian Harries and Dick Mainwaring once again don the deerstalker, plus fours and travelling capes of Holmes and Watson, & are joined by Common Ground regulars Joe Leat & Emily Bennett in this classic Xmas comedy thriller.
Common Ground have been bringing their distinctive brand of  music theatre - with strong narrative, strong emotion and just a touch of the surreal – to venues across East Anglia, since 2008.

We try to fit in one of these every Christmas, so it's almost our pantomime. This time it had to wait till January and performed in a different venue but just as good (apart from hard seats).

It's very predictable. Makeshift costumes, deliberate overreacting, mistakes and trips which I'm not convinced weren't scripted anyway, and an abundance of rude innuendos. Total nonsense that makes us laugh out loud and come away smiling.
.