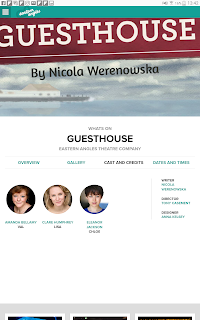 “It is 1966. I am sixteen years old and I am on the Venetian bridge with Brian Joy from the Golden Sands Guesthouse and he has bought me a 99 and I am on top of the world. Now I am 16, I know what boys want and why you mustn’t give it to them.”
Tensions are high in Clacton-on-Sea. Guesthouse owner Val has been taken ill and both her estranged daughter Lisa and ambitious grand-daughter Chloe have arrived to lend a hand. Chloe is close to Val, having spent most of her childhood raised by her grandmother. But Lisa and her mother are not on best terms. In this poignant and beautifully observed drama, three generations of women have to set aside differences as they decide the fate of their family-run B&B.
Guesthouse asks what's it like when the town you were proud to grow up in becomes impoverished? What does it take to keep going? And what does it take to face the truth?
Written by Essex playwright Nicola Werenowska and directed by Tony Casement this new play will tour across the East of England.
=============================================

It was lovely to have a trip to the Sir John Mills Theatre as it's a beautiful old building of character and you're part of quite a small intimate audience.

This performance was brilliant, just three women as the three generations of a disjointed family with all bonds of family ties stretched almost to breaking point by resentments and jealousies of what had gone before.

Each piece of what had gone before was slowly revealed with the clever use of projected images onto a curtain at the same time as Val is reliving how it all started and developed into the family that's now left.

Our group of four all enjoyed it immensely but did think it was a bit of an abrupt ending with so many questions unanswered......Maybe they'll make a sequel.
.


Another quick whiz catchup as lots of stuff has been going on but I've not managed to blog it, so here's some highlights.

Last week O sat at my table having blown out his candles and announced it was his best birthday ever! He'd been a little disappointed that the friends he wanted to share his birthday with were not available, so that plan was put on hold for a later date, so what to do on the day? Felixstowe pier has just been rebuilt and O was thrilled when I said we'd all go to the arcade. We all agree those machines are a total frivolous waste of money so O had never done them before and loved every minute and appreciated every coin spent. Have to say Hubby loved it just as much hahaha. We had lunch on the pier in the sunshine then home where M joined us too. Next surprise was a piñata as he'd mentioned to me last February that he'd "never had one in my whole life". As we were four adults we let O attack the piñata donkey on his own. I'd filled it with some sweets, 10 small bouncy balls and lots of cut up coloured paper strips as confetti, made a suitably impressive cascade. Birthday cake was pavlova by his request. 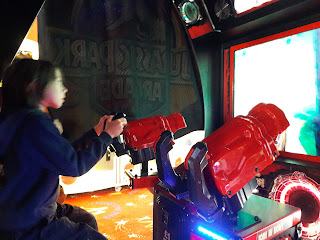 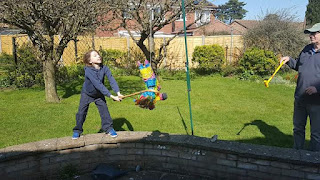 Yes my knee still hurts,  so I finally went to the surgery, and the nurse practitioner  (rare to see a doctor these days) thinks I've torn the ligament. He sent me for x-ray and referred me to the muscular-skeleton unit at the hospital (found out that's the posh name for physio). The next day I went into x-ray with my form and they told me straight away there was no bone damage which is good.

FriendH has now retired so I didn't need to drive to her's on a Friday evening and sleep over, this time she drove here early on a Monday and slept over so lots of catching up chat. Non-stop as usual and Hubby stayed out of the way. We've been friends since childhood, more like family really, so she was thrilled that Daughter made the time to call in and see her too.

R had a sleepover with me last weekend while on the Sunday Daughter&E went busking in London as Tudors and M and the boys were computer game creating and Hubby was out on a charity bike ride. So we were company for each other. 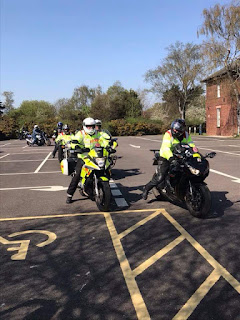 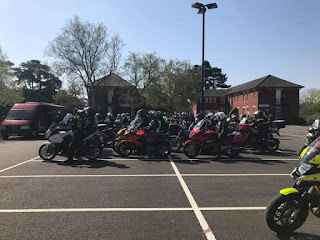 Lunch with my x-work team finally happened. Seems they will only get together when I organise them, they didn't even manage a Christmas dinner without me. It had been a year since our last lunch and everyone said we must do it more often hahaha.

I'd decided it was about time I'd heard when my follow up CT Scan would be (mid-May will be 6 months after my op) as once I'd got a date I could make sure to have my blood test done the week before. So I phoned hospital appointments and they had nothing, then I phoned the consultant's secretary who told me they are waiting for me to have a blood test BEFORE they sort my scan date! Lucky I'd checked as they hadn't bothered telling me the system had changed from how I was doing it for the last four years.

While I was in chasing people mode I thought it time to chase the Physio referral. Apparently they had not received anything from my surgery. I've now done the online self referral, I've received a couple of exercises to do and have an appointment for 17th May.

Hubby and I lunched with friendsN&T and chatting about holidays together they said they would love to late in the year as they have a very busy summer already. N is really nervous of flying and avoids it totally but says she is willing to give it a go for a very short flight so we holiday somewhere that's warm. So we are now looking for an October holiday in the south of France.

Hubby had charity money for banking so into town then we walked to Specsavers for me to collect my new specs. My prescription has changed a bit on my left eye but a lot on my right eye and my glasses now feel weird. Adjustments were made and I was told to give it a couple of weeks and hopefully it will all settle, if not go back. While looking back through my records the fitter said I'd had a big prescription change once before and I told her that both times has followed major surgery. She didn't think it was a coincidence!

Daughter is here today with her caravan to get it ready to use. So her and Hubby have been washing, scrubbing, fixing hinges, blocking up mouse holes, glueing the table and washing all the bedding/blankets/cushions/etc. I've done food and chatting with all three grandchildren :-)

And this evening is theatre again which will have a post of its own.
.
Posted by MumB / @mumbosh at 16:34 2 comments: 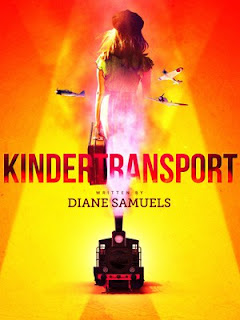 Presented by Queen’s Theatre Hornchurch and Les Theatres de la Ville de Luxembourg in association with Selladoor ProductionsBy Diane SamuelsDirected by Anne SimonDesigned by Marie-Luce TheisA deeply moving and timely modern classic about a woman’s struggle to come to terms with her past.Hamburg 1938: nine year-old Eva is forced onto a train by her desperate mother in order to escape the threat of World War II. Arriving at Liverpool Street Station, tagged like a piece of luggage, she’s handed over to strangers.Manchester 1980: Evelyn, a proud mum, prepares to say goodbye to daughter Faith as she leaves the family home. But what Faith finds in the attic will change her life forever…This heart-warming production is from the producers of last year’s acclaimed revival of ‘The Crucible’. It marks the 80th anniversary of the Kindertransport, which saw thousands of Jewish children ferried from Austria and Germany to safety.Diane Samuels wrote this extraordinary and haunting play 25 years ago. It has never been more relevant than today.

I don't think it's just because I'm Jewish that I found this so powerful and emotional as my friends felt exactly the same.

Really well acted and a very clever way to have current day intertwined with the history it came from.

A performance I would very highly recommend.
.
Posted by MumB / @mumbosh at 15:13 2 comments:

Over the years I seem to have developed some very definite ways of doing things and usually it's for a very good reason, so I thought I'd share.

Only just realised you might find this useful, though I've done it all my adult cooking life, because I've a very cautious respect for graters!

Soft objects like cheese, hard boiled eggs, etc can be grated slowly but for hard veg you need to get into a firm rhythm and before you know it they're done. So I stick a fork right near the veg end and hang onto the handle not the veg so my fingers don't get too close to the evil useful sharp bits. 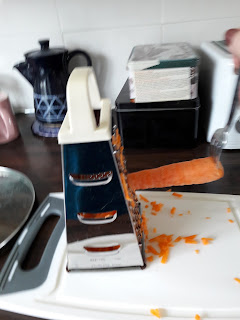 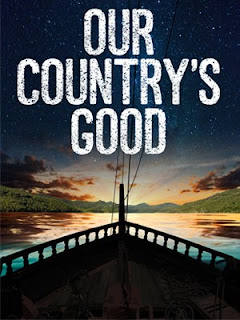 A Nottingham Playhouse Theatre Company Production in co-production with Ramps on the MoonBy Timberlake WertenbakerBased on The Playmaker by Thomas Keneally     Our Country’s Good is both a comedy and a powerful drama which shows us how we can escape the chains that bind us.     In 1787, ships each with over 700 convicts on board set sail on an eight month voyage. When they arrive in Australia, their survival is by no means certain: supplies are running out, the convicts are stealing food or trying to escape and the guards are threatening mutiny.  Our Country’s Good tells the extraordinary true story of a group of convicts and a young officer who rehearse and perform a play – Australia’s first theatrical production. With opposition from the officers and a leading lady who may be hanged, the odds are stacked against them.Our Country’s Good is a touring production made in co‑production with Ramps on the Moon, whose previous collaborations over the last two years include the comedy hit The Government Inspector and a critically acclaimed version of The Who’s Tommy. The production features the creative use of audio description, signing, and captions. For more information visit rampsonthemoon.co.uk

This performance was very long, over 3 hours, but it didn't drag at all. I really needed to know what happened next. The set was very minimal but that worked well. The cast (mostly d/deaf or disabled) were brilliant and although there were screens either side with descriptions and subtitles and the cast were constantly signing throughout it didn't detract from our appreciation of characters and their story telling.

One of our group left at the interval, she wasn't enjoying it at all, and we noticed a few people rudely leaving during the second half, but my two friends and I were pleased we stayed to the end. We said very enjoyable and thought provoking.
.
Posted by MumB / @mumbosh at 15:12 No comments: