It was probably because everyone was waiting for me to be well enough, so some of the friends I see only a few times a year all came along at once which gave me a lovely weekend of old friends and lots of food :-)

Friday evening, friendD and I went for a pub meal, very successfully trying a pub she hadn't been to before. We worked out that we had met 23 years ago, lost touch for a while then thanks to facebook met up again.

Saturday Hubby and I drove about 65miles(ish) and gathered at friendsL&K for pre-dinner drinks and friendsB&T arrived very soon after we did. They laughed as they raised glasses of beer and wine while I raised a mug of tea! Us three girls have been friends since school days so never short of chat. Then out in the cold for a brisk walk to the restaurant....lovely and warm in there. The food was excellent but far too much of it, some of the starters were as big as I would want as a main course. I couldn't even manage a dessert and that's unheard of for me. We slept over at friendsL&K although bedtime was after the very chilly walk home and the warming drinks and lots more chat.

Sunday when we had all finally surfaced the lovely K cooked us all a yummy breakfast all while chatting about some exciting future plans they have. Then big hugs and promises to get together again soon and we left them to their busy afternoon and drove home.

Today I had a lunch date with friendN. We've known each other for a long time too, in fact I remember his daughter being born and this summer she got married! Love that we can do lunch now that he is retired too and we had a great catch up.

I'm so lucky to have all these friends and the opportunities to keep in touch....but I will need to cut back on the calories for the next few days hahaha
.
Posted by MumB / @mumbosh at 19:44 No comments:


It's been lovely just popping into the kitchen this week to knock up stuff as and when the mood has taken me.

Apart from meals there was the tray bake of a sponge base (only half butter to flour and dark soft sugar, so a bit heavier) with a thick topping of crunchy cluster cereal with chocolate flakes (which had gone soft in the box) pushed into the sponge. The baking revived it to a very good crunch. The leftover blackberries and raspberries came out of the fridge and into paper cases with muffin mixture. There has been a lunch of using up casseroled veg whizzed to a thick soup and drunk out of a big mug (a cold wet day cuddle) with my own rolls still a bit warm from the oven mmmmm. And today was a quick batch of jam tarts and the very runny plum jam I made was perfect in these so I'll be making more as there are plenty of jars of jam that are not good enough to give as gifts.

Of course there are no photos as none of it lasted long enough :-)
.


This was another of our three couples mini-holidays. Bit of a panic to start with as told we were meeting the coach at 8am but got a text at 7:40am saying coach early and we're already on it but don't panic! We were instantly out the door and our lovely neighbourA was playing taxi so there in a jiffy.

We've done these before and this was the feeder coach and a nice easy ride to Thurrock with no other pick-up stops. Quick comfort break then onto our coach for the trip with driver Bob. I'll not bore you with long coach journey stories of chatting (all 6), sleeping (very rarely me), reading (mostly me), passing round sweets (all 6), losing keys (not me), finding keys (not me either) and lots and lots of getting ons and offs.

So coach-coach-ferry-coach and finally arrived at The Grand Hotel de Vianden in Luxembourg. A lovely hotel and even though our arrival was delayed quite a bit the staff gave us a lovely welcome, really efficiently sorted us into our rooms and served a lovely three course dinner. We all agreed at the end that it was a great hotel, spotless and modern(ish) upstairs and full of character downstairs. Someone there had a bit of a thing for hippos, there were loads of stuffed toys, pictures and ornaments everywhere! Excellent buffet breakfasts and three course dinners were included too!

Saturday coach trip into Luxembourg City where we did our own thing. Beautiful Cathedral and yummy pastry shop for our coffee break. 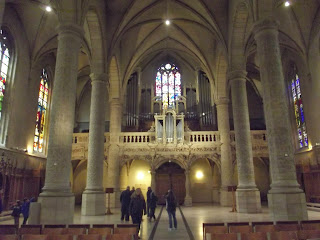 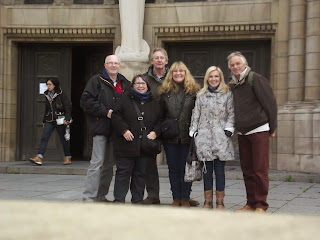 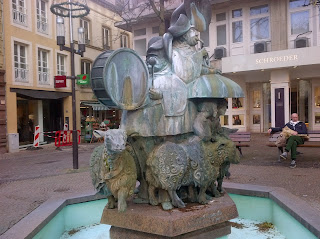 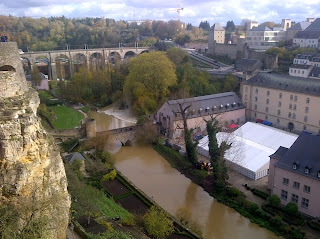 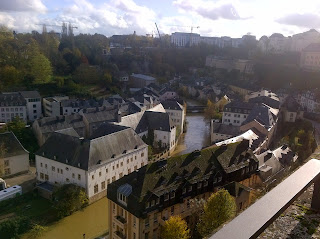 During dinner Saturday night the staff ushered us outside quickly to witness a local tradition for St Martin's day, where men light huge fire balls on chains from the bonfire at the top of the hill and (pretend) fight with then down the hill to the bonfire at the bottom, we all watched even though it was raining then ran inside to finish dinner. Afterwards our men decided that we would walk into Vianden to a small bar that had a jazz night advertised, so we all togged up for the cold and then once we got there decided €10 each entrance was too much so went to another bar for drinks. Back at the hotel we found the landlord entertaining those in the bar with a singalong and knowing that two of our men were musicians (earlier conversation) he handed friendF the guitar for a while and we all drank, sang and danced till finally heading up for bed at 1:45am.

Sunday's coach trip was along the Moselle River and a stop in Remich, then through Mullerthal (called Little Switzerland) and saw unusual rock formations, then through the pretty town of Echternach. 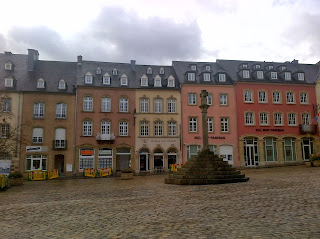 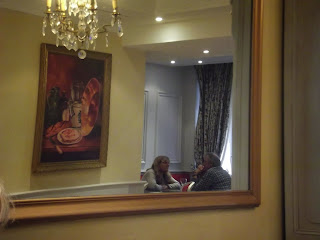 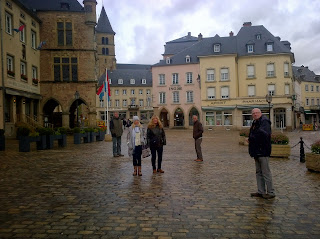 While on the road a white car was trying to speed past but misjudged and knocked into the side of the coach then drove off. Our driver was furious but managed not to swear, I was most impressed. A little further down the road we came to a t-junction and just as the coach was turning left the hit-and-run car was spotted parked up on the road to the right and half the coach shouted to let our driver know. Seems our coach had a few minor scratches and their top of the range Audi was bashed in right along its side!

Sunday dinner was good and there was an Italian singer entertaining us and the Belgian coach party, so she mixed French songs and English songs modern and traditional so we all had another sing along and dance. Great fun! Only damper on the night was paying our rather large weekend bar bill before we went to bed.

Early start Monday with breakfast at 6am and all luggage and passengers loaded by 7am. Thick fog for quite a while, choppy ferry crossing, heavy traffic, wet weather and road works however home safe and sound but tired around 7pm. FriendA played taxi again and Daughter had been in and turned the heating on, put milk in the fridge and even filled and boiled the kettle ready for us.

Well done BfriendM for finding this holiday at such a bargain price and well done friendF for his German and French language skills that sorted all our communication needs.
.