This has been Daughter's main summer event as a Tudor so as usual we are here for any grandchildren that remain in the 21st century.

Daughter went off on Friday with E and O and now O is bigger he's having a go at being a Page to the Gentry. 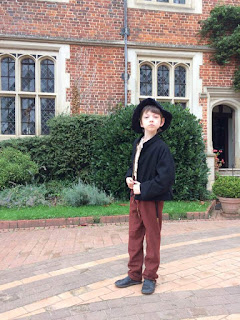 R is staying with us for the duration (11 days) and as she is working (voluntarily) for Red Rose Chain while they put on Much Ado About Nothing at Jimmy's Farm, Theatre in the Forest we started our substitute parenting by collecting her at 10:15pm as we did every night after, dropping her there for 4:30pm. I say we but actually Hubby did every run apart from Friday night collection.

She/we had Sunday and Monday off (Hubby was out all Sunday fundraising) then as a last minute thing R tells me she really needs a 1930/40s style costume for the following Sunday as they are holding a street party for the audience before the final performance. She had a look in mind and what she really wanted was a beige knitted tank top and had looked in the charity shops in Ipswich without success so Monday we went to Felixstowe as they have an abundance of charity shops and a lot of elderly residents so if not there then I doubt we'd find one anywhere. Well all we found was a very washed out beige long-sleeved jumper which I restyled for her and paired it with a white shirt and black skirt still in the wardrobe from her mother's teenage concert playing days (see I knew they would be useful one day). 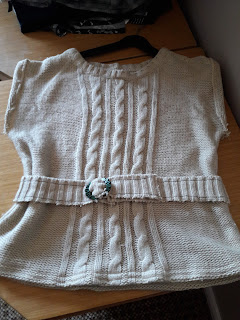 She chose not to wear the belt 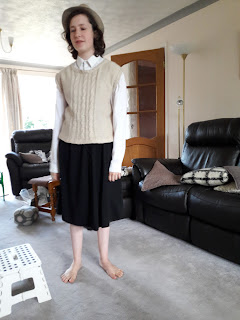 Also R had wished she'd brought her devil sticks with for something to do, so on the way back from shopping we called into home but her key wouldn't work, second attempt M let her in but she couldn't find the sticks bag, third attempt after messaging her mum asking if she'd left them in the car and told she hadn't they were found yippee (I drove a lot of miles to get them considering they only live 5 minutes away).

Monday evening we had a phone call from Daughter to say E wasn't feeling very well and will probably benefit from a couple of days rest from camping so Hubby went to get her. While here she ate well and slept well but did very little all day Tuesday, I'd started the day with my weekly physio circuit training session so was pleased they didn't need me to do more than sort meals and make packed food for R to take with.   Wednesday E got motivated to get arty and creative and needed me to hunt out art materials at various times, she also needed Hubby to sort computer/scanner/printer etc.

Meanwhile I finished knitting a cotton top which unfortunately turned out far too small for me and although knitted all from one cone seems to have a shade change across the front! I was given the cone of cotton so no costs lost so I'll put this into a charity bag and maybe someone will love it. 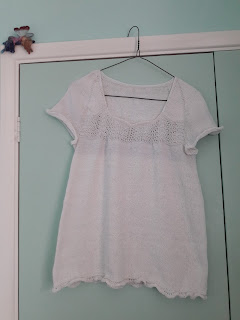 Very early Thursday Daughter arrived to grab a shower and collect E to get to college and pick up her exam results (two very good passes) she then took E back to Kentwell with her and had intentionally left O behind as he'd had enough. His Tudor shift was covered in clay and he told us he quite enjoyed being a page but hated having to wait until all the Gentry had eaten before the servants were fed, so he gave that up and spent lots of time in the pottery.

He took up his usual position on the floor by the door, as there are sockets available there, and gets stuck into his technology (making music this time). 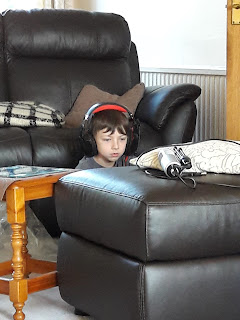 He stopped for a while when an experiment came to mind of "how can I position mirrors up and down the room to reflect images remotely like watching tv round corners". He was thrilled to see we had saved some mirror tiles under a bed for just in case! 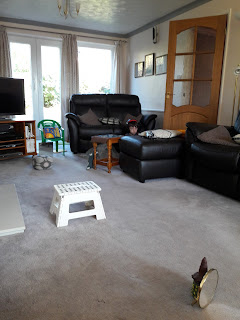 This had to be an ongoing experiment and the mirrors had to remain in place for days!

Thursday we also had a visit from sister-in-law who hasn't been here for years so it was lovely to see her. She came by bus and then train and Hubby picked her up from the station. We all had lunch together and later tea and cake then Hubby had to take R to Jimmy's Farm for theatre of course and O wanted some extra computing stuff from home so by the time he did that he was almost late for taking SIL back to catch her train so a bit of a rushed farewell.

R was telling O about her theatre work and all about this Shakespeare play in the forest and so O said he really really wanted to see it. So I booked us a couple of tickets for Friday night. I've given our night out it's own blog post.

Friday M opened R's post as requested by R and gave her her exam result via messenger, also a good pass.

We had arranged for R's friend F (who also volunteers for theatre) to sleep over Saturday night as they have the end of show party for cast and crew till midnight and a last performance Sunday. I've known F and her mum for years as they are friends of Daughter. Twin beds in R's room so no problem. Then Saturday evening R sends a message do I mind if two more girls stay over as well. Of course I said they could and gathered plenty of bedding for them in the lounge to use the four recliners as beds. Hubby had to wait ages for them in the car park and they got back at nearly 1am and I could hear them chatting for ages.

Unfortunately O had a bad evening not being able to get to sleep so I was up and down, then when I'd seen the girls home I got into bed with O and stayed there till morning, each time I tried to leave he cuddled up so I couldn't.

All up and breakfasted and then Hubby goes out for the day with his friends which had been arranged ages ago. So I cleared away all the bedding, done two loads of washing, and made packed food times four for them to take to theatre. Because of the forecast really wet weather the forest had been cancelled and moved to their much much smaller Avenue venue so R got a message could her and the girls come at 2pm instead as the whole set needs rebuilding.

Now of course I've the "fox-chicken-corn" situation with a five seater car, driver plus four girls plus O. It's now raining really heavily, thankfully it's so close that I made two trips. 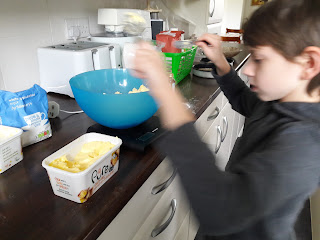 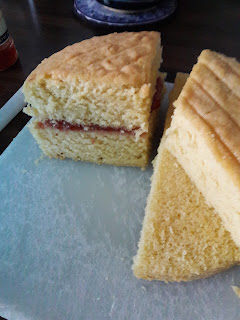 followed by board games at the table.

Bank holiday Monday and I'm home with Hubby R and O and nowhere to rush to! A much quieter day, O happy to watch tv or sit with his ipad and headphones. R didn't even get out of bed till 3pm. Ending the day with a full roast dinner and thought Daughter and E would be back to share dinner with us before taking the children home. But they were running really late so we gathered all their stuff, and there was lots, and I took them home.
.

Theatre: Much Ado About Nothing.....

Who says romance is dead?…Well that might have been Beatrice and Benedick during one of their legendary skirmishes of wit, but luckily the lovebirds Claudio and Hero have a cunning plan…So what could possibly go wrong? This year’s Theatre in the Forest brings Shakespeare’s hilarious comedy of courage and courtship to the beautiful woods of Jimmy’s Farm!
MUCH ADO features some of Shakespeare’s most iconic couples and we’re over the moon to have a cast full of familiar faces this year, who will be lending their extraordinary musical talents as we take you back in time to the 1940s!

R is living with us while Daughter is away and is working voluntarily for Red Rose Chain Theatre company while they are doing this year's Theatre in the Forest, so we can be transport there and back (and making sure she's fed).

O arrived on Thursday sleeping over till Monday and really wanted to see this. So I booked tickets for the two of us for Friday night and R very kindly reserved two front and middle of the raised seats which are probably the best seats to have.

It was all great fun, very lively actors making Shakespeare’s dialogue fit with post war characters and even some song and dance thrown in. There was also a lot of audience inclusion some of which was hilarious and the audience responded well with loud applause or laughter or clapping along or cheering whichever was appropriate at the time.

Then just before the interval it started raining and unfortunately never stopped. The interval was cut short and the second half started amid people sorting their coats and extra giant rain ponchos we'd been given. The show went on of course and the cast brilliantly ignored the weather apart from a few ad-lib comments. Unfortunately audience enthusiasm was definitely dampened! Overall though O and I thoroughly enjoyed it.
.

Comes around every year..... 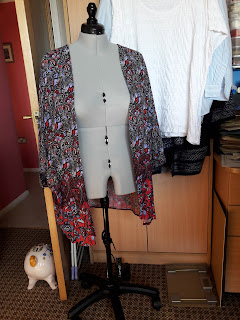 from Hubby, so no excuse for clothes that don't fit properly because I can't pin them on myself. I need to spend some time getting her to my size. Think she needs a name too.

This birthday seems to be a continuous eating out celebration.
Last Tuesday was a Mexican birthday dinner with my girl friends.
I eat out every Wednesday night anyway.
Friday lunchtime we had a birthday lunch with Daughter, M, R, E and O. That pub was chosen mainly because it had a great outside play area but unfortunately it was raining so O nerve got to use it.

Saturday (my actual birthday) Hubby took me out and after a couple of rainy days all day Saturday was sunny and very warm.
We started at Thorpeness and had a good walk around 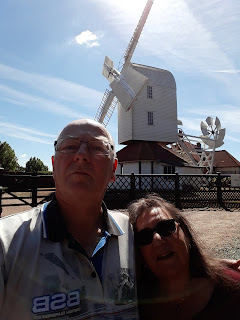 Lunch was by the boating lake watching ducks, swans and the various techniques of the rowers. 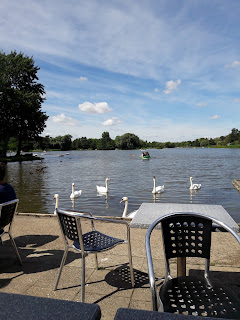 We then took a drive to Aldeburgh (normally we could walk from one to the other but my knees were objecting). As I'd said it was very sunny and warm and Aldeburgh is a very popular place so nowhere to park! Driving on we made a stop at Snape for another walk around, along the river, shop, gallery and museum.

Last stop was into Woodbridge and a walk along the High Street and bought a few bits including the last two fresh scones in the bakery so just had to supermarket for some clotted cream and had our own cream tea when we got home. Well you have to have cake in your birthday right?  Half was cream then jam, the other half jam then cream so as not to offend either the Cornish or the Devonians. 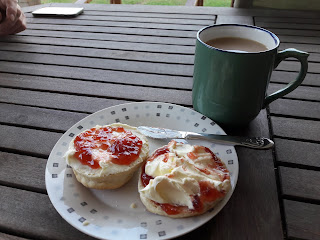 Sunday (today) lunch was another pub with Son&fiancé.
And amazingly I've lunch Monday and Thursday and dinner Tuesday and Wednesday at different venues with different friends still to come this week hahaha.
Birthdays are fun!
.