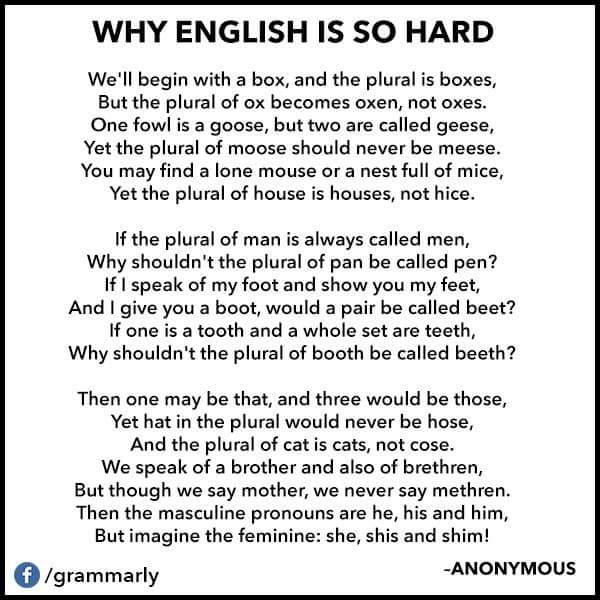 
Doesn't everyone love a good wedding, especially when it's family and we all get together to celebrate  😊

Friday 19th June my nieceV married D and now they are Mr&MrsJ-H.

After a late night Thursday (not in bed till 1am tut tut) hubby and I were up early scrubbed, poshed-up and hit the road by 8:45am. 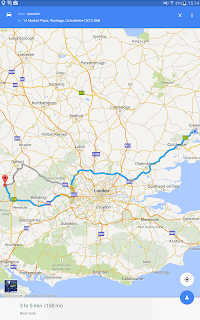 We arrived at our hotel and while hubby found the car park I eventually found our room, in a very old building with a labyrinth of corridors on three floors, bumping into various members of the wedding party in various states of getting readyness. 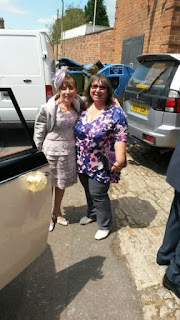 When sonK and his fiancé were ready and friendD then with Hubby and I we drove in one car to the venue, a purpose rebuilt for functions converted barn. It was lovely meeting up with all my extended family (far too big a family to add all the photos sorry guys). 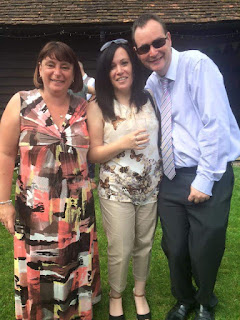 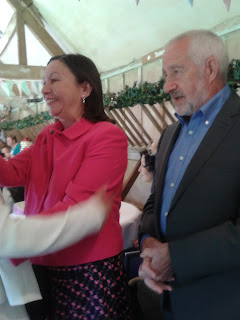 And of course Son, Daughter and our precious grandchildren 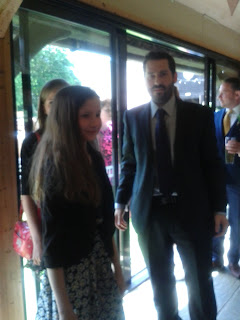 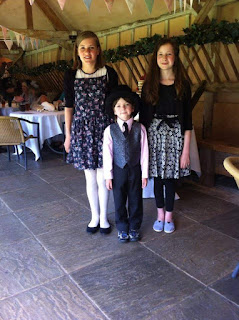 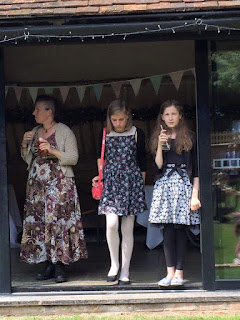 The ushers then moved us from the bar area to the barn to be seated for the ceremony and brother-in-lawK looked very proud (and slightly nervous) as he walked his beautiful daughter (nieceV) down the aisle. Very proud mum too waiting with the groom and his two best men. It was a lovely service and the barn had been decorated with jars filled with wild flowers tied up everywhere. 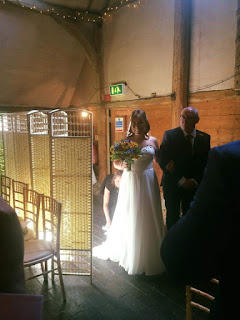 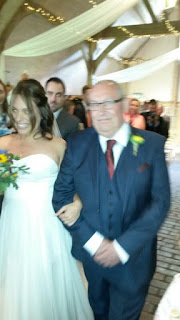 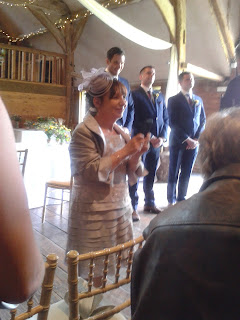 We all then moved out to the lawn and were given handfuls of rose petal confetti to throw over the newly married couple as they walked between our long guard of honour line. 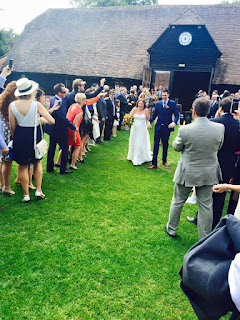 Someone had come up to O just before the ceremony and asked if he would give the bride a horseshoe as she thought it would be luckier coming from a young boy (and cuter) and he agreed so we did that and hopefully the official photographer captured it because I didn't think to take a photo myself doh!

Out on the grass there were games for the children 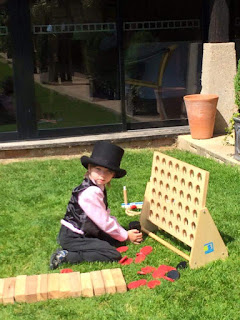 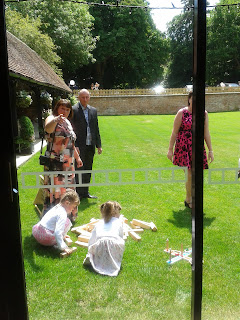 And a steel band playing 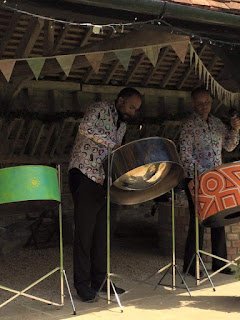 There were drinks served and canapés and the sun was shining the whole time.
When they had rearranged the barn we were asked in to take our seats for dinner. We had the little jars of our homemade chutney as wedding favours (remember chutney fest?) 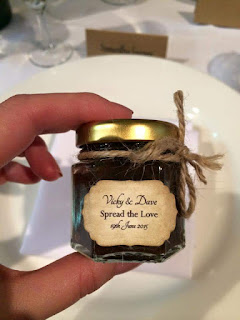 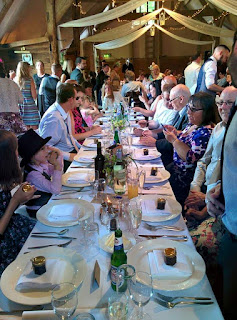 Also on the tables were cards for the "speeches sweepstake" each table could decide whether to gamble or just play for fun. I guessed that all the speeches would last about 45 minutes and you know what, I was almost spot on! 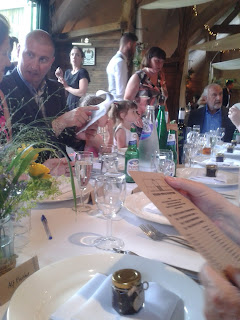 Dinner was the most amazing spread of salads, bbq meats and hog roast and the vegetarians had barbequed halloumi with skewered vegetables followed by mixed berry pavlova mmmmmmm

Of course there was the cutting of the cake 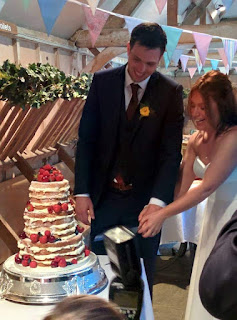 And while they were changing the barn from dinner formation into party setting we were out on the grass or in the other barn areas where tea and coffee was available and a table full of sweety jars.

There was also a large pin board and a polaroid camera with instructions, and this was the end result 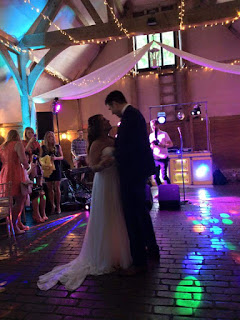 Later in the evening when it changed to disco there was a lot of diy dj-ing with the newlyweds going first and sisterS going second. 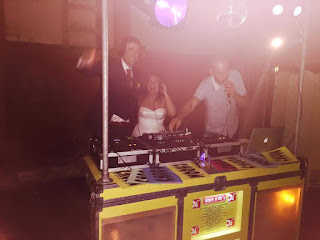 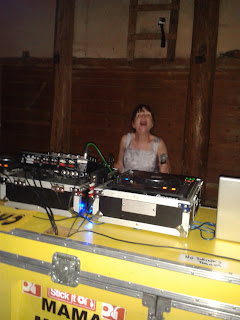 And so at the end of our lovely day (not everyone called it the end when we did, heard they went till 2am!) we went back to our hotel (actually hubby drove as he'd had very little to drink even though I practiced driving his car before hand in readyness).

Up for breakfast Saturday morning were various members of the wedding party were all looking very bleary eyed but happy.
.


We have had a street party a few times before and this seemed like as good an excuse for another one as any. NeighbourT suggested it at our last coffee morning so we let her organise it. Not really much to organise, she just put this invitation through everyone's letter box in our Close. 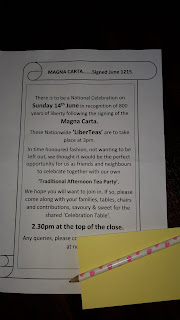 It rained but we had a big gazebo.
We had bunting.
We had lots and lots of food.
We had tea, coffee, wine and beer.
We had lovely neighbours and friends to chat to.
We were out there having a good time for more than six hours! 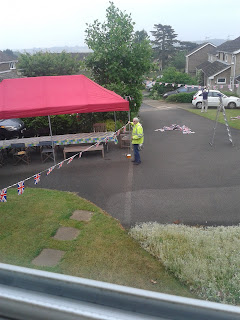 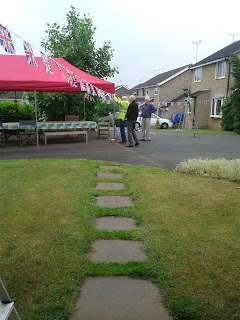 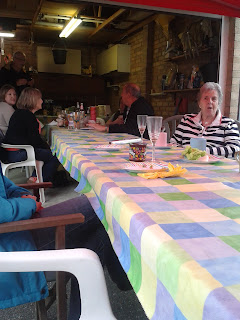 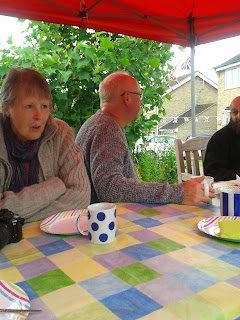 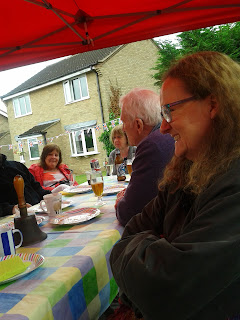 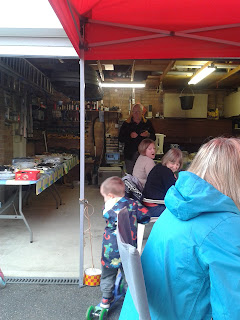 And I was having too much fun and forgot to take any better photos than these.
.
Posted by MumB / @mumbosh at 14:18 2 comments:


This one took about 15mins to make although I cut the pieces out months ago but did nothing more because I didn't know what handle it needed, then I found a belt I'll never wear again. The fabric is from stretchy brown velvety jeans. 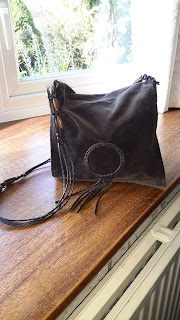